Our place to be creative 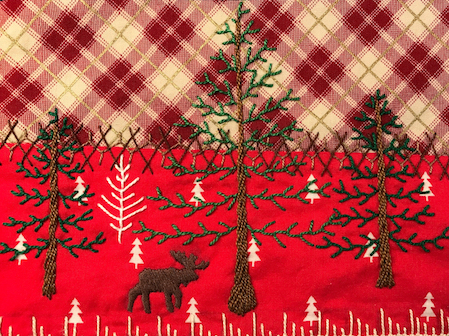 Take a Stitch Tuesday week 9: Cretan Stitch. Back to the earlier cabin block. I had the idea that I could use Cretan and Herringbone stitches in a combo to create something that would resemble a fence, then the plan was to layer in trees to make a forest scene.

The plan was probably ambitious as a crafter [read non-artist 🙂 ] , but it was fun. I returned to the basics of crazy quilting and sewed along the seam. Cretan stitch first in light tan cotton perle #8, followed by a wider Herringbone stitch in dark brown cotton perle #8. I had actually weaved the dark brown under every other cretan stitch, but because the herringbone stitches ended up about 2 cm long I couched the intersections. The couching hid the over/under look, but at least they are secure.

Second photo shows trees layered on top of the fence and around the moose. I’m debating adding more little forest creatures and continue trees in the plaid panel as well. The trees were fun to sew up. I’ve been inspired by Judith Baker Montano’s, “Free-Form Embroidery” so hoping to add more fun whimsical and layered motifs over the year.